On a rainy Monday, we were in the A-Lab, a former Shell Research Laboratory on the banks of the IJ, just a 2 minute ferry-ride from Amsterdam Centraal station, and many were newcomers to the city. Nik Gaffney and Martin Howse were introducing us to a method for gaining our bearings and relating to our location through ancient practices of scrying, brought into a present-day context through the use of modern technologies and languages. We practiced remote viewing, attached an antennae wire to a weather balloon, and threw worms onto a microchip to generate code (and worm poetry) in the Python programming language. 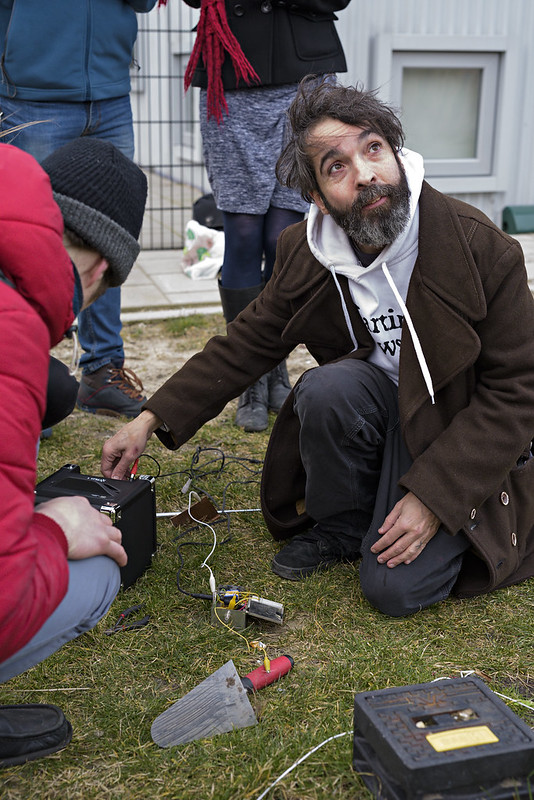 Earth Coding workshop by Martin Howse & Nik Gaffney_Sonic Acts Festival 2015, The Geologic Imagination Photo by Pieter Kers (www.beeld.nu) Scrying is the act of channeling one’s attention through observing details of an object or process. This state of concentration allows for images and thoughts in the subconscious to arise, and for the intuitive range of the imagination to surface in the observer’s mind. Geomancy, elaborated in Agrippa’s 1655 text “On Geomancy,” but widely practiced in different forms for thousands of years, is a form of scrying that concentrates on the landscape. To focus our minds, we began with an exercise to close our eyes and ask a question silently while rotating our bodies towards the north. Everyone orientated differently. What cues did we perceive for such a wide range of physical conclusions? What did know or think we knew about where we were? The next exercise was a collective remote viewing. One participant imagined a place while the others wrote down the first thing that came into their heads about the qualities of the place – smells, temperature, size, feelings. The Amsterdam natives in the group deduced a nearby location that would feature the qualities we collectively generated. After walking there, helium tank in tow, we began digging into the earth. Tossing worms onto a device that translates movement into language probabilities, Howse’s conduit for the transcription of worm poetry, we watched letters stream onto a laptop. A chip embedded onto a trowel measured the dynamics of movements from the worm. If they did not move at all the screen would display a repeated “the,” as this sequence of letters is the most likely to occur in the English language. The more they moved, the less likely the progression of letters and spaces would be in the English language. The algorithm translated the worms’ movement into a representation of their distance from our communication system. 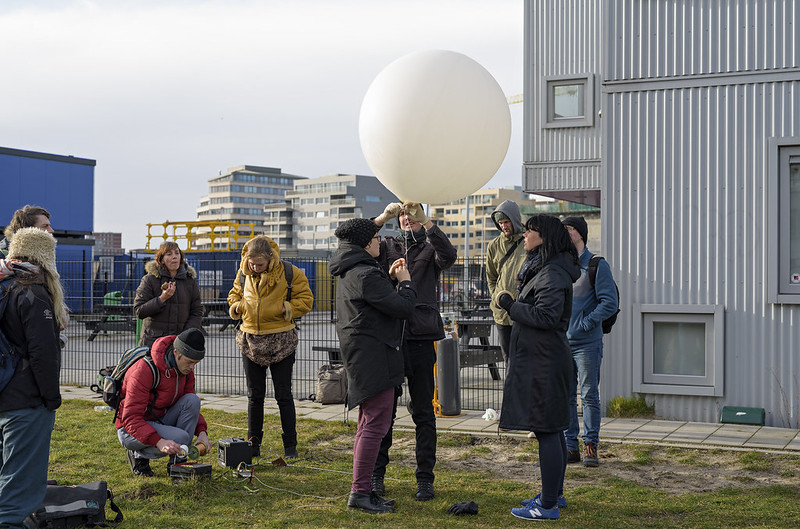 Earth Coding workshop by Martin Howse & Nik Gaffney_Sonic Acts Festival 2015, The Geologic Imagination Photo by Pieter Kers (www.beeld.nu) A long copper wire, strung along the ground was attached to an amplifier, capturing nearby electromagnetic hums, from unknown sources. For our final experiment, Nik Gaffney donned surgical gloves to avoid tainting the surface of the weather balloon with skin oils, and then sent the inflated ball into the air attaching another long wire that acted as antennae and receiver. We listened to the interaction of hums, radio signals, and distortions from collisions with the nearby low rooftop. The signals were indistinct, yet local, channeled yet porous. Our position as observers was chosen through our tools (technologies) and an instinctual process without a hypothesis or goal to extract meaning. Akin to the psycho-geographical derive, we walked through electromagnetic and coding territory, to observe what we would find rather than seeking out. Our actions, a form of contemporary geomancy, concentrated on the interacting signals between the atmosphere, the ground, and ourselves – all potential sites of transmitting, receiving, disrupting, and originating signals. Unlike outright divination, the more general category of scrying is a system for asking questions without solutions. Alyssa Moxley www.alyssa-moxley.com